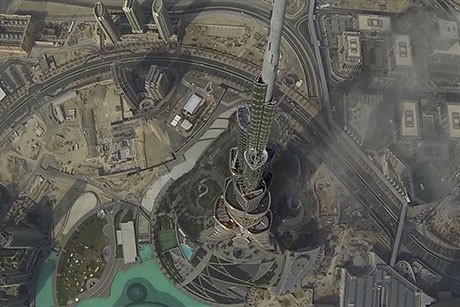 The UAV, known as TBS Discovery Pro, was also used to capture footage above the Burj Al Arab hotel, Atlantis The Palm hotel, The Palm Jumeirah and Sheikh Zayed Road.

“Strolling through Dubai’s skies to portray miracles of architecture,” said the company on its YouTube channel.

“The Palm, Downtown Dubai with its modern Metro, the tallest building in the world Burj Khalifa and the insanely beautiful Burj Al Arab.”

It is part of a series of videos that also show views of the desert outside Dubai and another of dune buggies racing.

Unmanned aircraft are getting more affordable. Companies are pushing the boundaries of drone technology — and now, that includes protecting nature.

In Morrison, Colo., near Denver, a group is finding new use for its drones, 9,000 miles away.

In the U.S., the Federal Aviation Administration is still working on regulations and standards for drones, but overseas in Africa, unmanned aircraft are already being used over game parks, reports CBS News correspondent Jeff Pegues.

Even at night, thermal imaging drones can track wildlife. With an eye in the sky, drones are able to do things humans could never do.

In places like Namibia, drones — unmanned aerial vehicles, or UAVs — have been purchased to monitor game parks and to track poachers.

Crawford Allen, director of The World Wildlife Fund North America, said, “The poachers out there know that there is something in the sky that is looking for them. … We think (drone technology) is going to be an important tool that will help produce far more effectiveness in protecting these precious species.”

The World Wildlife Fund is working with the government of Namibia by providing technical help as the country’s park rangers learn how to fly the drones.

A $20,000 eye-in-the-sky can track elephants and rhinos.
Full details via http://cbsn.ws/1oSHveZ

The Black Knight Transformer, made by Advanced Tactics, recently made its video debut, demonstrating how a transforming helicopter and ground vehicle hybrid might operate.

Combining the vertical takeoff capabilities of a helicopter with the off-road capabilities of a ground vehicle, the Black Knight is designed to conduct casualty evacuation and cargo resupply missions. In addition to having a ground drivetrain for off-road capabilities, the Black Knight allows for an amphibious hull, cargo pod, or intelligence, surveillance, and reconnaissance pod to be swapped in for modular capabilities. Weighing in at 4,400 pounds, the vehicle is expected to be able to reach a ground driving speed of 70 mph and an air cruising speed of 150 mph.

The aircraft can be controlled remotely or operate autonomously. For the test flight, the aircraft was completely controlled by autopilot with a remote backup pilot providing power commands.

Originally designed for the Army, the concept was proposed to the Defense Advanced Research Projects Agency’s Transformer (TX) Program, which was seeking a vehicle that could operate on ground and in the air. The program ultimately chose a Lockheed Martin design, and was changed into the current Aerial Reconfigurable Embedded System (ARES) program.

Despite not being selected for the program, the Black Knight has been incorporated into the Marine Corps Warfighting Laboratory’s Enhanced MAGTF Operations Aerial Delivery program. According to the video, the concept has also been sponsored by the Air Force Research Lab and the Army Telemedicine and Advanced Technology Research Center.

The design successfully completed its first flight test in March 2014, having already conducted driving tests in December 2013. The technology demonstrated in these tests has cost less than $2 million in government funding.

Imagine there was a champagne drone delivery service that flies in bottles of bubbly at just the right time for celebrating life’s biggest moments.

The fantasy can become a reality for deep-pocketed guests at the The Mansion at Casa Madrona’s Alexandrite Suite in Sausalito, Calif.

The bay side hotel, which re-opened earlier this month after renovations, announced that the $10,000 per night suite would include the cutting edge champagne drone delivery service.

A video posted on the hotel’s Instagram account shows the robotic aircraft safely ferrying two bottles of pricey champagne through the air before making a smooth landing on a patio.

Washington:  Sixteen major US news organizations came together Tuesday to accuse the Federal Aviation Administration (FAA) of curtailing freedom of the press by restricting the use of drones.

Unlike other countries, the United States prohibits the use of drones, or unmanned aerial systems (UAS), for commercial purposes, although the FAA grants rare exceptions for government and law enforcement use.

In a brief to the National Transportation Safety Board (NTSB), the news organizations — including The New York Times and The Washington Post — argued that drones are a First Amendment concern.

Through “a series of threats of administrative sanction,” the FAA has “flatly banned” the use of drones for newsgathering purposes, according to the 25-page brief.

“The FAA’s position is untenable as it rests on a fundamental misunderstanding about journalism,” it added. “News gathering is not a ‘business purpose.’ It is a First Amendment right.”

The brief was filed in the context of the dismissal by an NTSB administrative judge in March of a $10,000 civil penalty that the FAA slapped on European drone entrepreneur Raphael Pirker for a promotional video he made in 2011 over the campus of the University of Virginia.

The FAA alleged that Pirker — based in Hong Kong and known among drone enthusiasts worldwide as Trappy — operated his five-pound (2.25 kilogram) Styrofoam flying wing recklessly and without a proper pilot’s license.

The FAA is appealing that decision to the full NTSB board, saying it is concerned it “could impact the safe operation of the national airspace system and the safety of the people and property on the ground.”

Other news organizations that co-signed the brief include the Associated Press news agency, the Gannett, Hearst, McClatchy and Tribune newspaper groups, and Advance Publications, owner of the New Yorker, Vanity Fair and Vogue magazines.

Last month Texas EquuSearch, a non-profit search-and-rescue group, filed a lawsuit in Washington against the FAA after it was ordered by the agency to stop using drones to find missing people.

In February, the FAA said it would miss an end-of-2015 deadline set by Congress for fresh regulations enabling civilian drones to safely share the skies with private and commercial aircraft.

It added that when regulations do come, they would come in stages. 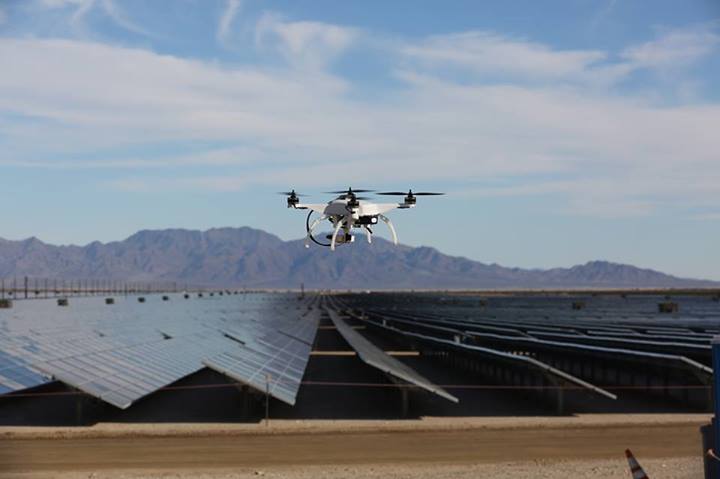 Like many new technologies, Unmanned Aerial Vehicles (UAVs) started with military applications and gradually found their way into civilian life. With support from investors such as Google, a new company called Skycatch has developed a UAV that’s used for remote monitoring and inspecting construction sites, mining operations, and farms. Now Skycatch is getting into the solar array inspection business. It will soon begin testing its technology on PV farms built by industry giants SolarCity and First Solar.

Photovoltaic panels emit a certain amount of heat, and it turns out that defective panels give off more heat than functioning panels. The difference in temperature can be easily detected using an infrared thermal imaging camera, as shown in the image below. A quick flyover by a UAV armed with an IR camera can identify malfunctioning panels quickly and inexpensively, allowing operators to replace the panels and keep the solar farm running at peak efficiency. You won’t see these flying over residential rooftop arrays; it’s only cost-effective for utility-scale solar farms.