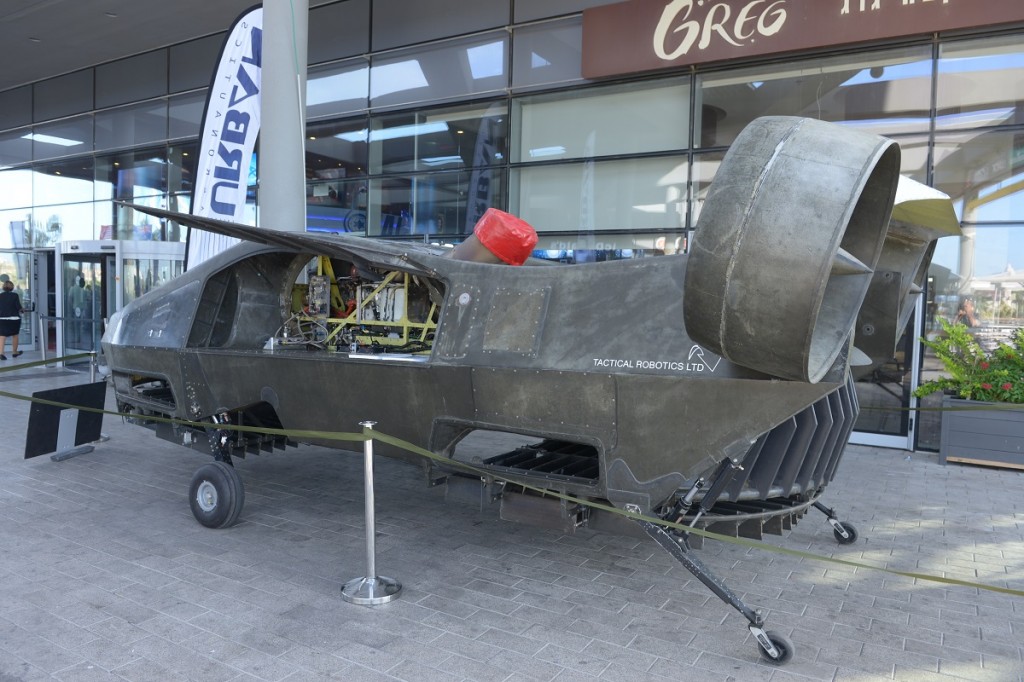 “The AirMule, an unmanned VTOL (Vertical Takeoff and Landing) aircraft developed by Tactical Robotics Ltd., a subsidiary of Urban Aeronautics, Ltd., has successfully completed a major milestone in preparation for full mission demonstrations scheduled for next year. The aircraft has completed several fully automatic test flights in which it carried out take-offs, flights to and from a specified location and landing back at its point of origination.

The 1-ton vehicle is unique from all existing vertical take-off and landing aircraft in that it has no exposed rotors. This allows the aircraft to fly in air space that is off limits for any other aircraft.

During these tests height above ground is maintained by two laser altimeters (to be augmented soon by a radar altimeter for dusty conditions). Accurate position is maintained through data fusion of GPS signals, INS data and optical reference to markers on the ground.

Acoustic signature (Sound Pressure Level in dBA) has been recorded as a function of distance from the aircraft to a calibrated microphone and has been found to be significantly lower than an equivalent helicopter.

Additional flight testing is planned for next year with a second prototype, now in construction, planned to join the flight test program in the second half of 2014.

Two San Francisco artists decked out a drone with tinsel and mistletoe for an interactive exploration of Christmastime romance.

George Zisiadis and Mustafa Khan have set up shop this holiday season in Fog City’s Union Square, where happy couples are shopping, ice skating and enjoying the festive decor.

Zisiadis and Khan maneuver their glittering drone over couples’ heads, putting a decidedly modern spin on the Christmas tradition.

While Norman Rockwell may not have approved, the artists’ subjects can’t seem to get enough.

Instead of running away from the airborne mistletoe, couples’ come in droves to celebrate their yuletide cheer with a kiss.” 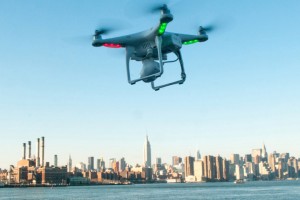 We’re in the drone zone.

The nation is flipping out over the future of unmanned aerial vehicles — but they’ve already taken off in New York.

The aerial robots have soared across the public library, MTV broadcasts and the Electric Zoo Festival. Halstead flies them for real-estate shots, startups are making drone “pets” and scores of hobbyists are sending them into city skies.

“Drones aren’t only for military use,” said David Quinones, head of New York firm SkyCamUsa. “They’re going to be used for so many things that are friendly and helpful. It’s really up to us.”

Politicians and privacy watchdogs have been in a furor since Amazon.com CEO Jeff Bezos ­revealed his futuristic vision of delivering packages using drones.

Last week, a tiny Colorado town mulled a proposal that would allow residents to hunt down the flying robots with shotguns in the name of privacy. Officials decided not to vote on it.

Because the devices are becoming more accessible — as low as $300 online — some reckless fliers have run into trouble.

Cops arrested a Brooklyn man in October after his drone nearly clobbered a businessman near Grand Central Terminal. In March, an unmanned craft hovered near a jet landing at JFK, prompting a federal investigation.

Amie Stepanovich of the Electronic Privacy Information Center in Washington, DC, said rules on individual drones should be put into place immediately as more enter the nation’s airspace. Her group is pushing for states to ­revisit their “Peeping Tom” laws.

“You have to understand, drones are designed around collecting information,” Stepanovich told The Post. “In New York, a lot of people feel safe because they live above ground level. They don’t believe people are going to be looking into their apartments, but drones make it that much easier.”

Still, local shutterbugs and real-estate companies have been guiding the hovercrafts for years.

Halstead started using a drone in 2010 to capture footage for high-end listings in Connecticut, the Hudson Valley, the Hamptons and Park Slope, while big-name developers including Extell have used them to snap aerial images of future construction sites.

In 2011, journalist Tim Pool used a $299 drone he called the “Occucopter” to stream footage of Occupy Wall Street.

In August, MTV Music Group used its own drone to film the crowd during its concert series at the Music Hall of Williamsburg.

Even at the New York Public Library, a staffer flew a drone inside the main branch last month and posted an online video of it buzzing above the bookshelves.

Sameer Parekh, CEO of the robotics firm Falkor Systems, flies his “pet” drone in Prospect Park on weekdays. The device trails the user as though it were a little dog — utilizing sensors to track a logo on the person’s T-shirt.

“The naysayers just aren’t seeing the possibilities. Those are the people who are stocking up on canned goods and ammo,” said New Jersey photographer Steve Cohen, a founder of NYCDUG. “It’s really important to tell the public how much good comes out of this technology.”

Swiss based artist, comedian and stuntman Superbuffo creates a new show called SUPERDRONES.CH that incorporates four drones into a live show. Drones are not only a reality in the theater of war but they slowly arrive in the centre of our daily lives, in the center of our cities and the realm of the performing arts.

The SUPERDRONES liveshow puts philosophical and moral questions on the scene that arise with the creation of drones. This time travelling artist creates that strange sensation that a part of the future is already here. So now the question is how love feels in times of drones.

From Greek mythology to 21st century philosophers, the creative minds behind SUPERDRONES introduce an intellectual and theatrical meta-level to the fascinations of hovering objects. And then there is showtime as well: the dronetamer risks the most dangerous stunt in the history of rc-stunts, see the movie to believe it, miss something else. 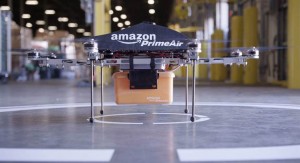 Will spotting Amazon’s fleet of “Prime Air” drones soon be “as normal as seeing mail trucks on the road today”? That’s what Amazon is saying, after CEO Jeff Bezos explained Sunday that the company would, in the future, deliver packages by quadcopter. However, that future may be a bit further out than the revolutionary retailer can say.

Coming from a company that employs robots in its warehouses, the drone vision isn’t too surprising. And sure, delivery drones are already a reality: The Marine Corps have been using two remote-controlled K-MAX helicopters to deliver supplies in Afghanistan. It was so successful that the military extended their deployment indefinitely in 2011.

But while they may be welcome in countries with little or no infrastructure, delivery drones flying through tightly regulated skies over the world’s biggest cities present a logistical nightmare, and are, to date, mostly wishful thinking. Newspaper delivery drones in France? A prank. Pizza delivery by Domino’s drones? A PR gimmick. TacoCopter? A hoax. The drone that tried to deliver contraband into a Georgia prison? Busted.

“A quadcopter airlifting you the next iteration of ’50 Shades of Grey,'” is “going to be a gimmick” at least “for the next five years,” Drunken Predator Drone, the persona behind the parody Twitter account @DrunkenPredator, wrote to NBC News in a surprisingly lucid email.

Sober responses came from other experts as well: “If the FAA Roadmap is an indication of where the regulations are going to be in the future … then I think Amazon is going to have a difficult time using the tech for delivery,” said Brendan Schulman, a lawyer at the firm Kramer Levin Naftalis & Franke in New York. Schulman should know: He’s defending the first person sued by the FAA for using a drone commercially.

Visit NBCNews.com for breaking news, world news, and news about the economy